IS GREATNESS INSIDE ALL OF US
WAITING TO BE DISCOVERED?

When the owner of video streaming company Look Studio – Dion Lane – asked Barnaby after seeing him host a comedy night if he would like to host an interview show, Barnaby said “Maybe. What’s it about?“

Dion told him “That’s entirely up to you – you do all the creative, get the guests and locations – I will cover all the production” and Everyday Greatness became a reality.

Nobody was sure what to expect from the show early on – it was just people getting together and talking about real human issues – there are no musical performances, no comedy Interludes, no product sales – no easily consumable gimmicks at all, just people sitting down having a chat about important human issues.

It all felt like it was going well early on – there were interviews at the Sydney Cricket Ground, Chris O’Brien Lifehouse, and the Hills Grammar School, but it was when ex Australian of the year Adam Goodes told Barnaby why he decided to come on the show that Everyday Greatness proved it was adding real value to the world.

Some people just inspire you – there are people who have to overcome a lot of adversity, they have all this stuff thrown at them but they just soldier on, and you are one of those, mate!

Want to Be a Guest?

Everyday Greatness is an interview show where host Barnaby Howarth speaks to some incredible people with incredible stories and helps people realise that rain falls on the just and the unjust are like, but sometimes you just have to get over it and go and play in the puddles. 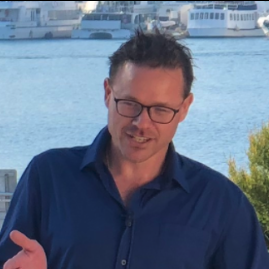 Barnaby Howarth knows something about everyday greatness. A former AFL player for the Sydney Swans, the author of two books, a widow, and an in-demand inspirational speaker living with diabetes, Barnaby began Everyday Greatness to highlight the hero in all of us.